Statement from the Ministry of Agriculture and Forestry in Turkey

The support amounts to be deposited according to the TCKN last digits of the producers are as follows:

For additional daily news from milling around the world: global-milling.com
at 04:31 No comments:

An assessment of the agenda by TUSAF President Günhan Ulusoy

Turkey's Industrialists Federation (TUSAF) President Günhan Ulusoy shared his views about the agenda to a private television channel in Turkey. Indicating that the food and agriculture sector is as important as the health sector, Ulusoy stated that if we give the opportunity for a disruption in our food chain to evolve, it may cause larger problems in the future.
Ulusoy noted that Turkey's flour industry is very strong ad will continue to flourish.
Answering a question about transition to automation, Ulusoy expressed his thoughts as follows, 'There are 523 enterprises and 20,000 direct jobs in our industry. Very few people are needed during the production phase. The main need is people in the packaging area.'
TUSAF President Ulusoy also added that, even if a decision is made in this direction, it will take at least an average of six months to implement, and that automation in the enterprises depends on the machinery manufacturers.
In his statements, Mr Ulusoy also noted that looking at the flour consumption map per capita, there is more consumption in the east compared to the west, while the average is 160kg per person per year. The situation is now above average, the retail shelves are empty in the west and new products are replaced quickly.

For additional daily news from milling around the world: global-milling.com
at 04:26 No comments: 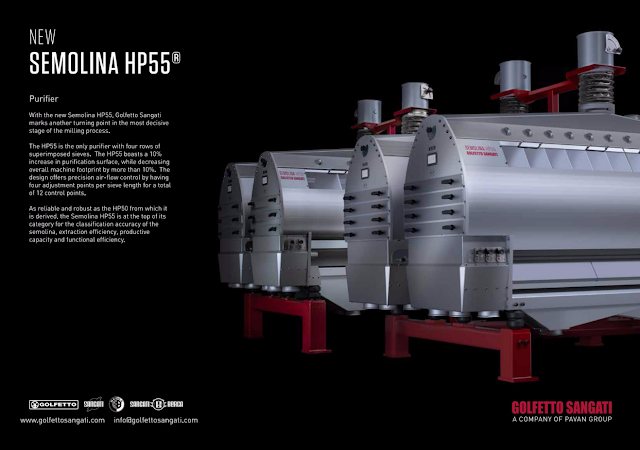 Over the last century, the Group’s history has followed the interweaving stories of its three consituent companies. These disparate paths have led to the current Golfetto Sangati, a company that represents the culmination of a long journey that started in the Twenties.
Golfetto, originally founded in Padua, specialised in the engineering of cereal manufacturing plants. Its foundation is the starting point from which all future events took place. It was followed by Sangati’s foundation, in 1929, a company that in just a few years became a renowned name in the milling industry.
In 1952, Berga S.p.A. was set up. At first the company specialized in milling machines and silos. It then widened its business to animal feed production. During the seventies it became a recognised leader in the engineering and building of mills, animal feed plants, cereal storage and handling for harbour terminals. The company expanded even further with the opening of new branches in Europe and Northern Africa.
Visit the website HERE.

For additional daily news from milling around the world: global-milling.com
at 14:09 No comments:

Global turbulence in the markets creates new risks in the agricultural business, and the most important task now is to adjust business strategies to the 'Era of Uncertainty'. UkrAgroConsult is still preparing for the 17th International Conference 'Black Sea Grain 2020' which will be held on September 2-3, 2020 in InterContinental hotel, Kyiv, Ukraine.The 'Black Sea Grain' Conference is a recognised marketplace and a major annual meeting point for the top agribusiness community. It is a large communication platform, providing two days of exclusive agri-market insights from leading industry experts, coverage of the global macroeconomic and regional trends, long term forecasts on commodities market, effective networking and face to face contacts with 700+ delegates.

For additional daily news from milling around the world: global-milling.com
at 20:36 No comments:

Near Infrared Spectroscopy has been used in grain milling for many decades, increasing food quality and profitability. Bühler’s NIR Multi Online Analyzer (MYRG) provides continuous monitoring and analysis of the key attributes that determine the quality of a wide range of intermediate and final products.

The key advantage: the proven technology delivers accurate information without delay and allows for immediate adjustment where necessary thus contributing significantly to a mill’s bottom line. Recently the technology has been adopted by a growing number of corn mills, bringing these benefits to one of the most important crops in the global food industry. 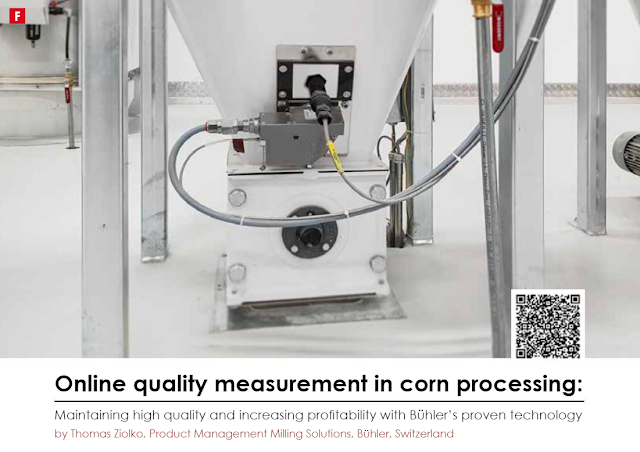 In grain processing, timely and accurate quality control can make a significant difference to the bottom line. The characteristics of the raw material determine the price of the end product. As fluctuations can occur at any time in the process flow, spot checking is not a sufficient method to assure quality. For optimal results it is necessary to monitor the flow continuously.

Near-infrared spectroscopy (NIR) that utilises the near-infrared range of the electromagnetic spectrum has been reliably in use in the grain processing industry to do this for decades, resulting in significant additional revenues for mill owners.

Bühler’s NIR Multi Online Analyzer (MYRG) stands out for providing precise information on product quality in real time through continuous online testing via compact sensors that are easily retrofitted into existing plants. With its ability to measure several product parameters in parallel, the system has been adopted widely by wheat processors. But other grain processors too can benefit greatly from this technology – particularly those in the booming corn processing market.

For additional daily news from milling around the world: global-milling.com
at 17:40 No comments: 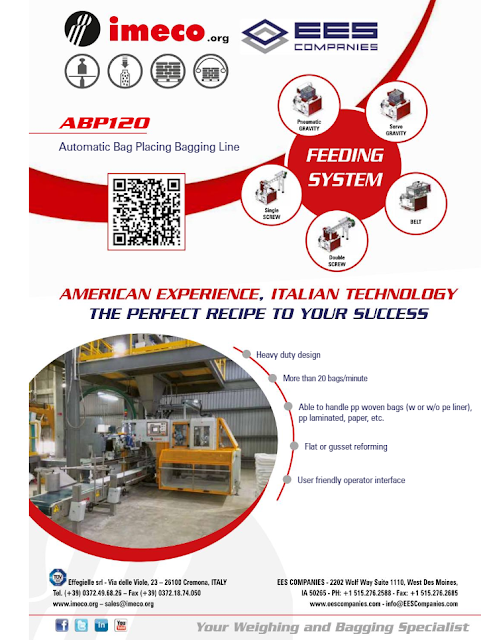 Imeco is based in the very heart of the main agricultural area of Northern Italy, in Cremona, around 100km south east of Milan, which is also in the middle of one of the most advanced industrial areas of Europe.

This unique position blends the most modern hi-tech production and design compatibilities, with an understanding of the subtleties of nature and of its products.

At first the research then the manufacture and last but not the least the design makes Imeco one of the leaders specialist in dosing, weighing and packaging system for bulk products.

For additional daily news from milling around the world: global-milling.com
at 14:08 No comments:

Improving both animals’ well-being and profitability
The growing demand for more animal-friendly production has developed into a global phenomenon. Animal welfare organisations, food retailers and consumers are all calling for solutions to improve animals’ well-being.

Relevant efforts have often been focused on production systems and management. However, there are many other ways to improve animal welfare. Examples thereof are breeding, transport, medication and, most of all, feeding. The common denominator in all these is that they require investment. The obvious question is: What’s the bottom line? We need solutions to increase animal welfare and profitability at the same time. And this is where phytogenic feed additives come into play. 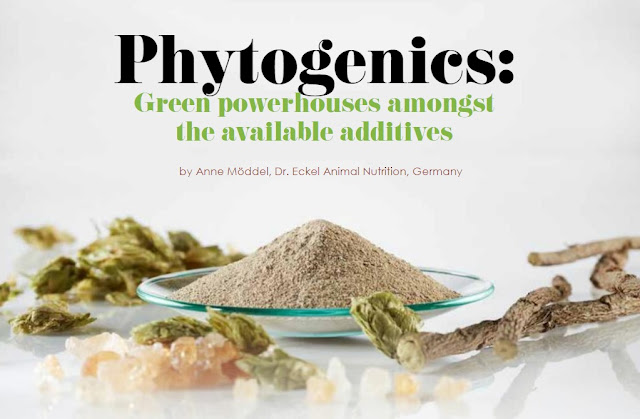 From nature, for nature
Antibiotics are still the typical product of choice in many countries, since they appear to be a safe bet to ensure profitability. Their use in feed throughout the decades has shown that production can be increased by suppressing negative environmental factors. The penny has dropped: we have finally come to realise that this is not the way to go. In fact, it is a dead end. The incidence of antibiotic resistance, constantly on the rise, puts even more pressure on the production chain.

The focus on animal welfare in modern agriculture is no mere trend but a requisite, both from an ethical and from an economic point of view. It is a far-reaching issue that concerns all stakeholders in the food value chain, including suppliers, retailers and consumers.

Considering that feeding is the first link of the production chain, it seems logical to intervene at this level to improve animal welfare. Research has shown that feed additives can have a positive effect on animal welfare. And here, phytogenic substances are in the vanguard. Meanwhile, a number of studies have shown that combinations of phytogenic active ingredients could effectively replace antibiotics, preventing bacterial resistance and improving safety and animal welfare.

Depending on their components, phytogenics possess a broad spectrum of activities. For example, some support gastrointestinal health, others are anti-inflammatory. And they can achieve even more. Specific phytogenic feed additives have a positive effect on feed digestibility, on the gut microflora and, last but not least, on growth and performance. Since the available resources are used more efficiently, productivity increases.

Ultimately, it benefits both humans and animals because a healthy gastrointestinal tract improves litter quality, decreases emissions, reduces the amount of medication administered and makes food safer and healthier overall.

For additional daily news from milling around the world: global-milling.com
at 16:23 No comments: