Being successful in ICT for 40 years is not easy. What is the secret? Specialising in success-supporting software tools for the feed industry, continuously investing in well-trained staff and focussing on innovation.   Discover the advantages of cloud computing: real-time formulation - optimal collaboration with colleagues and customers - working mobile.

Visit our booth 08-D049 and learn all about our recent innovations in feed formulation, quality management and logistic follow-up:  Real-time formulating in the cloud, smart phone apps, risk management, etc. Come and share a glass with us during our happy hour, each afternoon from 15h30 till 16h30.  Here are a few good reasons to  visit us:
Read more about why you should visit Adifo at VIV Europe. 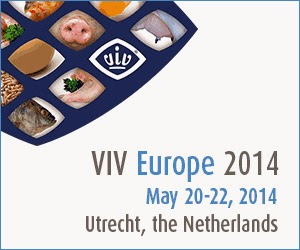 The Global Miller
This blog is maintained by The Global Miller staff and is supported by the magazine GFMT which is published by Perendale Publishers Limited.
at 05:06 No comments:

Mathews Company (M-C) who has led the grain dryer industry in 10’ tower sales for nearly 25 years, announces plans for the “Next Generation” of their 12’ tower grain dryer series. The new series will meet the demand of on-farm and commercial producers for a highly efficient grain dryer that utilizes the latest technologies available.
This new design is based on operational experience that encompasses nearly 25 years in vacuum-cooled tower drying and follows in the success realized by the popular “Next Generation” 10’ Tower redesign. According to company president, Joseph Shulfer, “As in the 10’ tower re-design, the parameters of the dryer, including heat and cool holding bushels, airflow, and burner characteristics, have been revamped to provide the most efficient drying process for current grain varieties being harvested. These tried and true changes have seen tremendous success from end-users over the past two years"
Meeting the market demand for greater production capacities with high drying efficiency, the new models will replace the current series and will include three (3) sizes with capacities ranging from 2,000 bushels per hour up to 2,800 bushels per hour, based on 5-point moisture removal.  Several prototype units will be in operation throughout the entire Midwest during the 2014 harvest season for field testing before full availability is expected in 2015.
Overall improvements include a completely re-designed airflow and burner system that will yield more efficient operation. In addition, a newly developed proprietary process burner with a cast aluminum manifold and stainless steel mixing plates has been implemented into the design. M-C’s engineering team has modified several key components to simplify field assembly time and increase the overall structural strength of the machine. These modifications allow for quicker modular in-field assembly, bringing installation time down to a couple days versus the previous design which required a week or more.
Headquartered in Crystal Lake, IL (U.S.A), Mathews Company has been a leading global manufacturer of high quality innovative agriculture equipment, specializing in grain drying since 1954 and celebrates 60 years of business in 2014. M-C is committed to “Building for the Future,” striving to provide superior products and unmatched service through innovation, expertise and quality.  M-C dryers are available through authorized dealers worldwide.  The company’s web site is www.mathewscompany.com.
The Global Miller
This blog is maintained by The Global Miller staff and is supported by the magazine GFMT which is published by Perendale Publishers Limited.
at 04:19 No comments:

The first ever conference ‘Insects to feed the world’ in the Netherlands from 14-17 May will present the state of the art in research, entrepreneurship, gastronomy and policy discussion, about insects as a future food and animal feed source. More than 400 participants from over 40 countries will show the huge potential and exciting new possibilities, that insects for feed and food offer for entrepreneurs and how they can contribute to a more sustainable food sector. The conference is organised by Wageningen University in collaboration with the Food and Agricultural Organization of the United Nations (FAO).

The conference participants represent research institutes, universities, national governments, international organizations, and private food and feed enterprises. These will discuss about food and feed safety, poverty alleviation, environmental impacts and business opportunities and challenges.
Attendance of the conference is open for journalists after accreditation. During the conference there will be daily updates for the press in the late afternoon (see below).
The conference programme starts with a keynote presentation of the Director of the National Institute of Food and Agriculture, U.S. Department of Agriculture, Washington. The opening session (afternoon of May 14th, 17:00 hours) includes speeches from the Netherlands Government, the Wageningen University and Research Centre, the Food and Agricultural Organization of the United Nations and from the Kenia based International Centre for Insect Physiology and Ecology.

Venue
The conference will be held in Conference Centre Hotel De Reehorst in Ede, (near Wageningen) in The Netherlands.
Accreditation
Please note that also for journalists accreditation is compulsory, please contact: Insectstofeedtheworld@wur.nl. Attending the conference is free of charge for journalists. However, please note that the organisation is forced to charge 40 euro/day for catering services per person for accreditation more than one day. Please indicate which days you would like to attend and the number of staff joining.
Press briefings
The local press briefings are scheduled:
Wednesday May 14th, 18:30-19:00 h (after official opening starting 17:15 h)
Thursday, May 15th, 17:30-18:15 h
Friday, May 16th, 17:00-17:45 h (closure including conclusions and recommendations)
Saturday 17th, Excursions
#Insects2014
During the conference a twitter team will send updates from @Insects2014 and with hashtag #Insects2014.
Further information
Further details are available on the website, see conference and latest information. Conference outcomes are available on FAO Edible insect.
More information on the conference can be provided via Insectstofeedtheworld@wur.nl or by prof. Arnold van Huis, Wageningen University, tel. + 31 317 484653 or arnold.vanhuis@wur.nl. Photo and video material is available on website FAO Edible insect. (Click on ‘Resources’ in left column on http://www.fao.org/forestry/edibleinsects/en/ )
NOTE: Wageningen University is part of Wageningen UR (University & Research centre). The mission is ‘To explore the potential of nature to improve the quality of life’. Within Wageningen UR, nine research institutes both specialised and applied have joined forces with Wageningen University to help answer the most important questions in the domain of healthy food and living environment. With approximately 30 locations (in the Netherlands, Brazil, Chile, Ethiopia and China), 6,000 members of staff and 9,000 students, Wageningen UR is one of the leading organisations in its domain worldwide. The integral approach to problems and the cooperation between the exact sciences and the technological and social disciplines are at the heart of the Wageningen Approach.

The Global Miller
This blog is maintained by The Global Miller staff and is supported by the magazine GFMT which is published by Perendale Publishers Limited.
at 04:02 No comments: 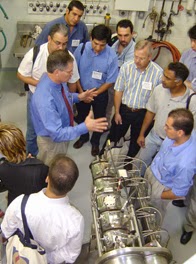 Reservations are accepted on a first-come basis. For more information, programs and application forms, contact:

The Global Miller
This blog is maintained by The Global Miller staff and is supported by the magazine GFMT which is published by Perendale Publishers Limited.
at 03:32 No comments: