A review of The State of Food and Agriculture: biofuels prospects, risk and opportunities 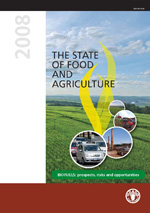 This report was prepared by the Food and Agriculture Organisation (FAO) of the United Nations in June 2008, on the state of food and agriculture of the world. This report looks at the implications of rapid recent growth in the production of biofuels based on agricultural commodities.

The Report comes in two parts.

Chapter one contains the introduction and some key messages, it then goes on to deal with agriculture and energy looking at the opportunities and risks for biofuels. Also covered are the policies and objectives.

Chapter two give a technical overview of biofuels and agriculture. Looking at the different types of biofuel and the types for transport. It also covers the lifecycle of biofuel, and second generation liquid biofuels, and the potential for bioenergy.

Chapter three looks at the economic and policy drivers of liquid biofuels, along with market polices. Policy measures affecting biofuels development the economic cost of biofuels and the viability. Also the underlying objectives of biofuel policies.

Chapter five deals with the environmental impacts of biofuels and if they will help to mitigate climate change?. It also looks at weather biofuels will cause an effect on water, soil and biodiversity? and if biofuels can be produced on marginal lands? ensuring environmentally sustainable biofuel production.

Chapter six deals with the impact on poverty and food security at national levels and household levels.  It also looks at biofuel crop production as an impetus for agricultural growth and development, and the equity and gender concerns.

Chapter seven covers the policy challenges, such as questions addressed by this report, the framework for better biofuel policies and areas for policy action.

This report covers a complex and interesting issue, looking at all aspects of biofuels and the effects on agriculture and the environment. In my opinion a valuable source of information, for anyone interested in biofuels and would be useful to future students studying environmental science as well as a good source material for any teachers, one for the bookshelf.

This blog is written by Martin Little The Global Miller, published and supported by the GFMT Magazine from Perendale Publishers.