EU compound feed production down by 0.3 percent in 2011

EU compound feed production down by 0.3 percent in 2011 / no significant market trend expected in 2012 despite high quotations for major feed materials

In the wake of the 55th FEFAC Annual General Meeting on ‘EU CAP reform impact on EU livestock and feed sector / EU food waste strategy’ on June 15, 2012 in Brussels, FEFAC members have provided final estimates for the compound feed production for the EU-27 (Greece, Malta and Luxembourg excluded)in 2011. The total production estimate is now set at 151 mio. t, i.e. 0.3 percent below the figure for 2010. Cattle and pig feed have seen their production fall, respectively by -2.1 and -0.6 percent, whereas poultry feed increased by 1.1percent, thereby confirming its position of leading segment of compound feed slightly above pig feed.
The most important factors which weighed on the EU feed demand in 2011 were the still fragile economic situation of the pig sector and the high feed material costs. As regards ruminants, the severe drought on the first months led to a lower forage harvest during the spring cut but this was offset by the good autumnal weather conditions that favoured grass growth.
EU Member countries recorded very heterogeneous performances, with some experiencing dramatic falls of their compound feed production such as Czech Republic (-14 %) or Denmark (-6.6%), whereas several countries such as Germany, Poland and, to a lesser extent, Italy, managed to buck the general market trend with positive growth around three percent, supported by a surprisingly quick recovery of pig farming activity.
The high cereal prices over the last two years contributed to improve the competitive market position of industrial compound feed production vs. home mixing. However, this gain was offset to a certain extent by the development of alternative pig feeding strategies based on roughly grinded feed and liquid feeding.
As a result, Germany’s position as leading EU country in terms of total compound feed production before France was strengthened, with Spain scoring third.

Outlook for 2012
FEFAC experts identified the following key drivers for the compound feed market in 2012:
· On the livestock sector side, the entry into application of the new cages standard for laying hens from 1 January 2012 and the new group-housing requirements for sows which may lead to a significant reduction in young sows replacement in certain producer regions; the development of the Schmallenberg virus in ruminant populations may also weigh on the demand;
· On the feed demand side, the high quotations for all feed materials, whether energy sources like cereals or protein sources like soybean meal, due to high Chinese demand and seasonal drought in South America, will further affect the profitability of the livestock industry, in particular the pig farmers;
· On the supply side, the persisting problems on the trade of maize co-products (DDGs, Corn gluten feed) linked to asynchronous approval of not yet authorised GM events, despite the adoption of the technical solution last year.
As a consequence, FEFAC experts foresee a stabilisation in cattle feed production, a slight increase in poultry feed demand (+1percent) offset by a reduction in the demand for layer feeds (-5 percent) and a further setback in pig feed production (-0.5percent). Overall, compound feed production is expected to remain stable vs. 2011.
Click to enlarge 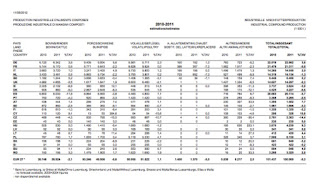