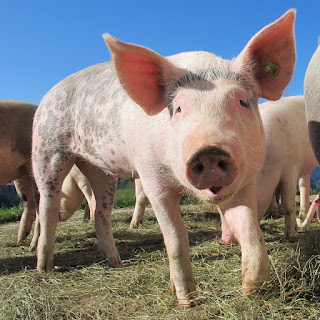 March 20, 2019
China's national pig herd is nearing crisis point following an outbreak of African Swine Fever. Unlike normal Swine Fever, the African variety is deadly and already China's pig numbers were down over 16 percent in February 2019 compared to the same month in 2018.Sow numbers falling at just under 20 percent based on a survey of 28 percent of China's 1406 counties. This year from January to February, overall pig numbers are declining at roughly five percent per month.There are more than 110 reported outbreaks of the deadly ASF in some 30 provinces, reports the Ministry of Agriculture and Rural Affairs, and the disease is spreading.
Milling and Grain has been called upon to co-host a one-day conference to address the issue of ASF in China, from the perspective of the feed manufacturer supplying feed to both infected, at-risk and clean farms. Milling and Grain has been invited by turn-key and equipment manufacturer Famsun to jointly host a meeting of some 200 large feed millers and pig producers in Beijing on March 27, 2019 to learn more about the disease, how it spreads and what can be done to either maintain or protect farms from contracting the disease.
The one-day conference will also look at what must be done to respond to the infection and how to go about rebuilding a farming operation following disease eradication.
There will be a range of local and international speakers on the programme with one specialist presenting from Spain and three specialists presenting from the UK.
'The UK is in a strong position to assist as it has faced several disease challenges over recent decades and has introduced strong bio-security on farms that protects both animals and farms by encouraging farmers to work together by creating an early-warning internet-based programme that can be used should a challenge occur and offer a robust and prescribed methodology for handing those threats,' says Milling and Grain publisher Roger Gilbert.
'We have provided three specialists from the UK with good knowledge of bio-security when it comes to disease prevention and identification in pig herds. And as our magazine is also published in Chinese we will be able to follow-up the advice and information given with further details for feed manufacturers to consider and adopt as we move forward.
'Working together is essential for the Chinese pig industry to combat and bring this devastating disease under control and feed manufacturers are in a good position to co-ordinate such an approach and work closely with pig farmers.
'This won't be an easy or short-term fix but an approach that addresses an ongoing issue that both feed manufactures and their pig-rearing clients must adopt and this is the first step in that process when farmers and feedmillers met on March 27 in Beijing.'
Biographies of speakers:
Chris Jackson, Export Director, British Pig Association and UK Technology for Agriculture and Genetics
Chris ran a breeding company nucleus herd at his family farm in Staffordshire for 40 years before retiring from pig production in 2005. For the last 12 years he has worked full time as the export promoter for the British Pig Association, an Approved Trade Association for DIT supported export promotion programmes.
He has:Played a leading role in the export recovery of the British Pig Industry organising overseas events with support from UKTI's SESA and TAP programmes. He has helped numerous small companies obtain funding to attend Trade Shows and Export Seminars in North & South America, Asia China and Europe resulting in multi million pound contracts.
Arranged inward missions using Govt and Industry match funding resulting in major business for SME's
Represented the industry at Export Certification User Group meetings with DEFRA and was a member of the sector group,( IATC) International Trade Forum and one of their sector specialists. Currently a Trade Challenge Partner for the UK Government.
Been instrumental in forming the British Agri Food Consortium which represents all aspects of the industry which will seek to become the new sector group.
Is an acknowledge expert on pig production worldwide with an in depth knowledge of the pig industry.
Until time restraints made it impractical to sit he was a Justice of the Peace for more than 25 years.

Dr Lawrence Brown, Sector Specialist, Department for International Trade, BVM&S MRCVSDr Lawrence Brown is the Animal Science & Aquaculture Sector Specialist for the UK Government's Agri-Tech Organisation within the Department for International Trade (DIT). His role is to increase overseas inward investment by linking academia and industry to develop world-class R&D and business opportunities in the sector. He provides scientific advice on animal and aquaculture health & welfare, from nutrition and genetics, to veterinary pharmaceuticals and sustainable agriculture.
Lawrence qualified from the Royal (Dick) School of Veterinary Studies at the University of Edinburgh in 2010 with a Bachelor of Veterinary Medicine & Surgery (BVM&S). After graduating he worked as a veterinarian in Cumbria, Derbyshire, Qatar and Australia. As a mixed- animal practitioner, Lawrence has treated animals of all shapes and sizes, his primary focus has been bovine, ovine and domestic species.
On returning to the UK, Lawrence accepted a role with a veterinary pharmaceutical company in technical marketing. He was the national representative of a team that launched a new drug molecule to the European veterinary market. In 2016 he was awarded a Diploma in Professional Marketing from the Chartered Institute of Marketing (CIM) and was a finalist for the 'Young Veterinary Marketer of the Year Award' (2015).
It was during that time he developed an interest in animal health innovation and biotechnology. This inspired a timely return to his home city of Edinburgh, which has the largest cluster of animal science companies in Europe. He started his own company, LJB Veterinary Services Ltd, offering clinical, advisory and business-development services. Since August 2017, he has been assisting a biotechnology company from South Asia set up an R&D facility at the newly opened Roslin Innovation Centre, neighbouring the Roslin Institute (home to Dolly the Sheep, the first mammalian clone).
Lawrence is an elected member of the British Veterinary Association's (BVA) Scottish Branch Council and has particular interests in life sciences innovation, sustainable agriculture and the application of digital technology to farming and medicine sectors. He is motivated by solutions to feeding the planet's growing population without compromising the environment or animal welfare. Lawrence is currently studying for a Master of Business Administration (MBA) at the University of Edinburgh.
Mike Button, Biosecurity specialist MiriusMike Button has over 35 years' experience in the animal and veterinary health industry.
Having qualified in veterinary science he has worked for genetic breeding companies, feed and nutrition, international animal health, and as a partner in an animal health business covering all species from cattle to camels.
For many years he specialised in the poultry industry covering all sectors from breeding and hatcheries to general production and nutrition. Currently Mike Button works for Mirius (former Coventry Chemicals) as General Manager – Healthcare specialising in animal health and bio-security across the world. This brings in cattle, pigs, poultry, shrimp and other species covering all over the world with many different production systems and challenges.
Mirius manufacture Omnicide which is a powerful surface disinfectant independently tested around the world. Recently Mike and Mirius have been specifically involved in the prevention of the spread of African Swine Fever. This encompasses much work in Europe but now with the spread of the disease in China much work has been done in all of SE Asia helping to protect the health of the pig population.
Omnicide has been independently tested by the European Reference Laboratory for its effectiveness against ASFv

For additional daily news from milling around the world: global-milling.com
at 10:29