GEAPS Exchange 2011, held in Portland, Oregon, February 27, through to March 1, 2011 was a huge success for everyone involved. As predicted, Exchange 2011 welcomed a large number of attendees: over the Expo’s three days, 2,065 delegates, exhibitors and guests came to Portland for Exchange 2011, and 368 booth spaces were occupied by 264 companies.

Attendees enjoyed countless hours of networking and the largest-ever student day program, as well as 30+ hours of educational programming. 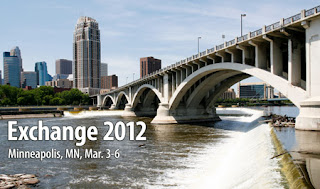 Looking ahead to Exchange 2012 in Minneapolis, Minnesota, March 3-6, 2012 booth sales are already breaking records. During Exchange 2011, all 383 booths in the main hall were sold to 212 companies. An annex with an additional 62 booths will be opening later this summer and there are already many companies on the waiting list to select their booth location for 2012 once the annex becomes available. Read more ...

This blog is written by Martin Little, The Global Miller, published and supported by the GFMT Magazine and the International Milling Directory from Perendale Publishers