Over the past century, global temperatures have risen by more than 0.6 degrees Celsius, with the Intergovernmental Panel on Climate Change predicting an additional increase of 2 to 4 degrees Celsius by 2100.

A major concern over this impending climate change is how it will impact future food security, The Business Insider reports.

A new study lends further validity to this concern, as it has found rising temperatures will likely cause a decline in our global wheat crops. Specifically, the research revealed that for every degree Celsius that global temperature increases, the world stands to lose 6 percent of its wheat crop. 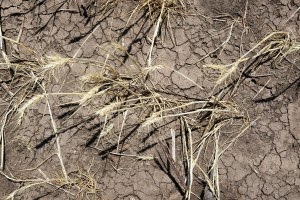 This is equal to a quarter of the annual global wheat trade, which reached 147 million tons in 2013.

For the study, University of Florida professor of agricultural and biological engineering Senthold Asseng assembled and led a team of 50 scientists from 15 countries. The team included Frank Ewert, a professor with the Institute of Crop Science and Resource Conservation at the University of Bonn in Germany, and Pierre Martre, a senior scientist at the French national research institute INRA.

Mr Asseng’s team collaborated to devise an ensemble of computer models to increase the accuracy of the predictions. The researchers worked with 30 wheat crop models and tested them against field experiments where average season temperatures ranged from 15 to 32 degrees Celsius (59 to 89.6 degrees Fahrenheit).

“[W]heat is one of the world’s most important food crops,” said Mr Asseng, whose team’s study was published online at the end of last year Nature Climate Change. “The simulations with the multi-crop models showed that warming is already slowing yield gains, despite observed yield increases in the past, at a majority of wheat-growing locations across the globe.”

For the past two decades, scientists have been trying to estimate the effects of temperature increases and climate change on wheat production, as it accounts 20 percent of the calories consumed worldwide. The expert consensus is that global food production needs to increase 60 percent by mid-century to meet the projected demand from an anticipated population of more than 9 billion people.

Yet, a study out of the Massachusetts Institute of Technology last year found that global food production was projected to fall by as much as 15 percent by 2050 under one scenario, with malnourishment increasing from 18 to 27 percent --with wheat found to be particularly more vulnerable to ozone pollution as compared to other grain crops.

Currently, US wheat supplies are up, with the 2014-2015 season-average farm price projected to be 10 cents higher on both ends to US$5.90 to US$6.30 and global wheat production remains record high, according to the USDA.

Mr Asseng’s team did not include an economist, so they did not try to analyze how decline in wheat crops could impact the prices of bread and pasta products.

“In general, if something is less is available, prices would go up, but the reality is much more complicated, so we don’t really know,” said Mr Asseng.

The world population gets 75 percent of its dietary nourishment from four crops that include wheat. The US produces about 10 percent of the global supply of wheat and exports a quarter of it, with about 22 percent used for livestock feed.

Considering these numbers, the impact of climate change on wheat could spell disaster for food prices. In fact, world average prices for wheat rose 136 percent between 2006 and 2008. And the International Food Policy Research Institute predicted last year that wheat prices may rise anywhere from 17 to 67 percent over the next several decades depending on how much temperatures rise in proportion to the rate of population growth.

So, what can be done to curb climate change’s potentially disastrous effects on our global wheat crops?

A University of Nebraska-Lincoln study found sustaining yield gains for grain crops (including wheat) would require changes in how the crops are grown - including planting crop rows closer together and exercising better weed and pest control - and might even result in only modest yield increases of 10 percent to 20 percent.

According to Mr Asseng, better crop management techniques such as sowing wheat crops earlier in the season and using irrigation when necessary, might also help be beneficial to sustaining production. Additionally, breeding new strains of wheat that are more heat -tolerant would be a crucial component to counteracting projected declines in crop yields.

“Breeders in international centers but also in the private industry are already working on improving heat-tolerance in crops,” said Mr Asseng.

“Considering that a breeding circle takes about ten to twelve years in wheat, and it might take more than one circle to improve heat-tolerance, we…need to invest now in breeding more heat-tolerant wheat.”

For additional daily news from milling around the world: global-milling.com
at 03:34