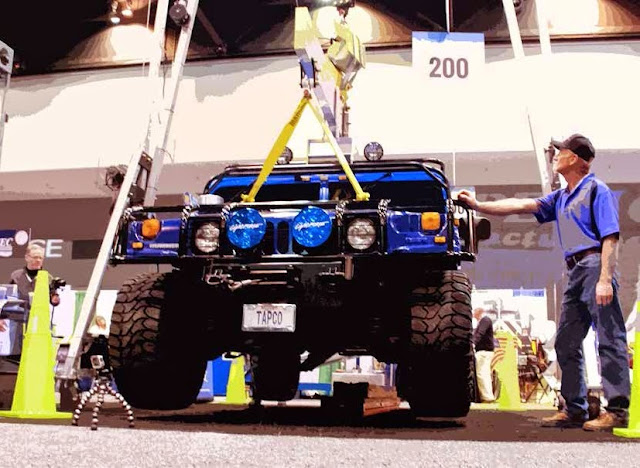 At the GEAPS Exchange in St Louis last month, the must see attraction was on the Tapco stand. Can an elevator bucket really be strong enough to lift a 9700 pound H1 Hummer?

Darren Parris visited Tapco on their stand to witness the demonstration, and then visited Tapco HQ to find out how it was possible

Attending Geaps exchange 2015 as I did last month in St Louis was a privilege. Once again, the Grain Elevator and Processing Society converged on the chosen city. This year it was St Louis, home to some of the most iconic sights and world class sports teams in America, such as the Cardinals baseball team, St Louis Rams NFL team, Missouri Botanical gardens and the globally recognised Gateway Arch, the gateway to the west. And last but not least of course, we should not forget Tapco Inc. which is also based in St Louis.


Upon entering the GEAPS exhibition hall, you simply could not miss the Tapco booth, as it dominated the entrance with their large blue H1 Hummer parked up all resplendent and awaiting the challenge to be lifted off the ground: it's complete four tons to be hoisted in the air with a simple plastic Tapco bucket supporting its whole weight.
This demonstration has to be seen to be believed.

So acting as the third party unbiased adjudicator, I took up my position, on the floor, perpendicular to the under chassis, camera in hand and recorded this momentous feat.


The electric crane came to life and as the bucket and frame of the crane took the strain, the Hummer began to move. And with seemingly no effort at all, was lifted clear of the ground. No sooner was this task completed than the critics raised their heads. 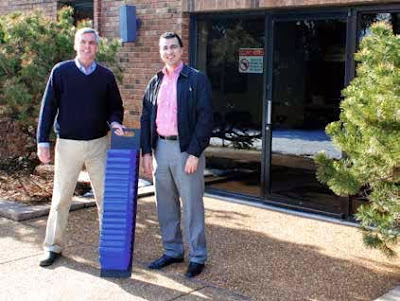 There were comments of  "it's fake” and “there is no engine in the Hummer" and "the safety cord between the crane and fastening to the bucket is taking some of the strain" followed by "the Hummer is empty".


So, the gauntlet was thrown down. If I was to lay witness on behalf of Milling and Grain magazine and all its readers to a specific act of strength and durability professed by a company of its bucket, it was imperative that all these concerns were dispelled.


Without hesitation, the hood came up to reveal the Goliath engine underneath, which caught the interest of many petrol heads at the show.

The crane fastening was re-attached with hood up and engine in full sight, all safety cords were removed, leaving just simply the bucket completely on its own to support the weight.


In addition to this, myself and other spectators inspected the inside and we were all happy that this was the fully armoured and fully functional Hummer we had previously been led to believe.
With no further ado, the electric crane came alive and with no ceremony the blue Tapco Hummer was once again lifted clear of the ground.

The watching crowd acknowledged the lift and we are happy to give Tapco the "As Witnessed by Milling and Grain" seal of approval! 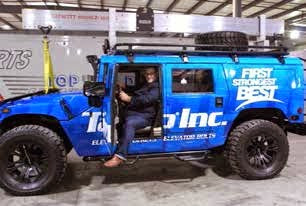 So frequent were the lifts throughout the Expo, same bucket-multiple lifts that the novelty wore off and it was clear the bucket had passed its test with flying colours.


Visiting HQ
Being in St Louis I had to make time to visit the Headquarters of Tapco Inc.


I had to understand, what was it that made these buckets so strong, after all it's a simple plastic injection moulded bucket off a production line, right?

How wrong was I. Upon arrival at Tapco and meeting with the global sales team it was clear to me in the first 15 seconds that I was surrounded by a team that truly believed in the superior quality of their product.

From here I was taken on a tour of the inner sanctum of the behind-the-scenes working of Tapco Inc. It was here that I was furnished with the intricate attention to detail that goes into every single bucket. No photos allowed as I was taken through what makes a Tapco bucket so special. 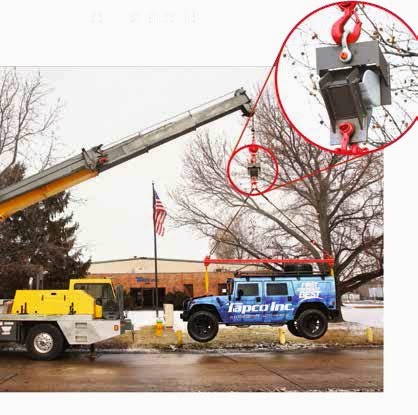 First, only the highest grades of plastic pellets are used on their more than 90 sizes of elevator buckets. Tapco has spent years researching the many brands of materials on the market to find the toughest resin used to make their buckets. Second, each size of elevator bucket is made in its own single cavity mold assuring the full injection of the strongest material to make the final part.


This combination of the strongest material and mold design sets Tapco apart from their competitors by supplying the Industry with a strong reliable elevator bucket.

Pre-made buckets in every size
It is here Tapco come into their own. As we left the factory floor we walked for what felt like miles and miles through multiple storage warehouses, where from ceiling to floor stood over one million pre made buckets in every size as well as multi millions of bolts and fasteners available in both metric and imperial.

This represents a multi-million dollar investment in pre-made and pre-paid stock by Tapco. Nothing is owed, everything is paid up and Yassine Abbad, Vice-President of Sales at Tapco, was quick to point out that this represented just how important their customers are to them.

They have invested millions in what is essentially an insurance policy for their customers, by holding stock ready to go in every size, all orders received before 15:00 are despatched the same day.

Yassine went on to explain that broken or old buckets in a mill meant downtime for his customers’ production which could cost US$10's if not US$100's of thousands, therefore a prime aim of Tapco is to exceed their customers’ expectations on delivery time.

So important is this ethos of supporting the customer, I was taken to a second warehouse complex just a block down the road, which was as big again as the first, bringing the total storage space to over 160,000 square feet; it was currently being kitted out with shelving to store the expanding range of buckets to meet the ever growing global demand.

It is here that I had time to play with the Tapco Hummer, as it is kept in this warehouse between exhibitions. Just another opportunity to confirm its all real and working.

So there you have it, a million reasons tucked away ready and waiting, at your beck and call to back blue.

For additional daily news from milling around the world: global-milling.com
at 02:50